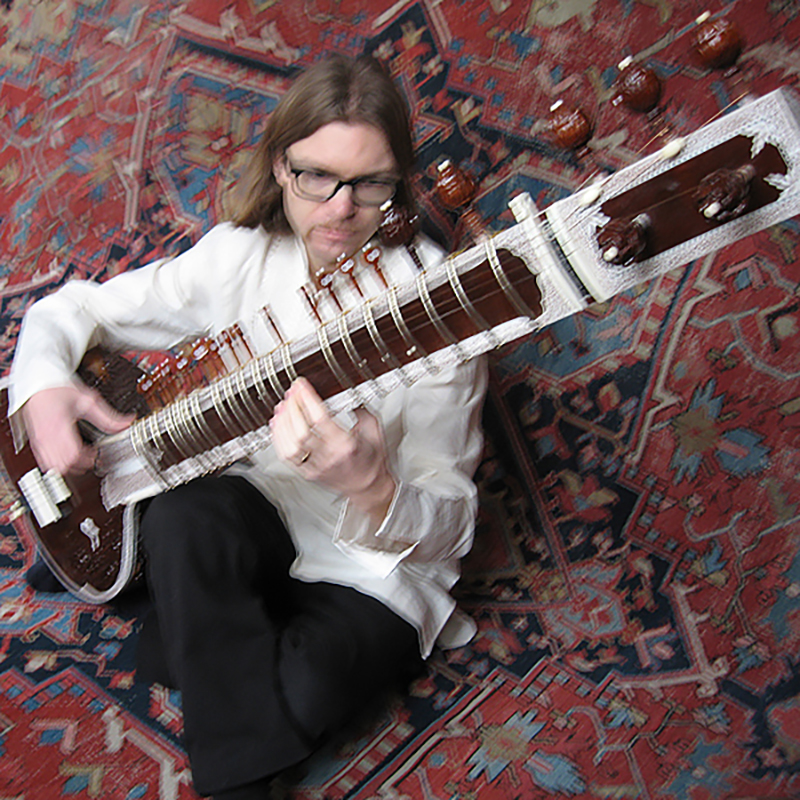 Jerry Johansson started out his musical journey some distant years ago in the Swedish city of Varberg, then as a guitar player and composer in various rock- and jazz-groups. After having had a minor revelation when experiencing a George Harrison-composition on a Beatles-album; an overwhelmed Jerry realised that the point of no return had finally arrived.

He immediately began studying the classical Indian raga and the world of the sitar on an advanced level, with a most serious approach.
This newly found universe of his does not only need highly concentrated and daily practise, but also requires an ascetical way of living and a humble approach to the world at large.

Sitar master Roop Verma appears, himself a former student of master Ravi Shankar; and he takes Jerry under his wings, so to speak, and Jerry becomes his pupil.
Jerry practises various Indian modal scales and ways of thinking and plays and plays, and in time reaches the innermost soul and spirit of the classical Indian raga.
The open mind of Jerry assimilates impressions and ideas, and the sitar player Jerry Johansson moves on from there to here; from a student to finally becoming a sitar master performer himself.

Jerry Johansson works in his very own tradition, in where ancient Indian traditions of the classical raga music assimilates together with the Swedish heritage of folk music; but also incorporates the knowledge and understanding of contemporary classical music. Musical textures extends, re-shapes and changes places; in Jerry Johansson´s exquisite ways of thinking and blending our ancient musical heritage from both East and West, a totally new and unique music emerges. A music in where traces remembrances from then and now, Scandinavia and Asia assimilates together to a totally natural music that is all Jerry Johansson´s.

Jerry moves freely as an adventurous musical earth-traveller in the best of senses; combining Indian ways of looking at the world with bare Swedish feet in the glowing grass of the sparkling world known as the ever-present NOW!

In 2005, Jerry was commissioned to write a piece for sitar and a string quartet from the Gothenburg Symphony Orchestra. 10 months later, the world premiere took place in Hagakyrkan in Göteborg, and shortly thereafter released on cd by Kning Disk (KD008). >

The spring of 2009 saw the release of Jerry´s composition Book of Dreams (KD058). Jerry on sitar, a wind ensemble and also a string quartet from the Symphony Orchestra of Gothenburg.

In autumn 2008, Jerry Johansson premiered his first larger work for jazz octet; Circles and Changes, performed by a group of legendary Swedish jazzers with Jerry on guitar. This event was also released on a critically acclaimed cd on Kning Disk in early 2009 (KD062).

For the release of House of Hope (KD092) in June 2012, Jerry once again trades his sitar in favour of his Gibson.
As we all know, it takes classic instruments to make classic music.
East, west, jazz, contemporary music, drones, improvisation, Swedish folklore, birds. fishes, birches, beaches and sand; it´s all here!

Every new record release by Jerry Johansson and his dynamic jazz quartet is always a treat; this time makes no exception. Jerry Johansson allows himself to travel deeper and deeper into the magical sounds of the electric guitar (in close conversation with his much loved Gibson 1955, jazz model). But, dear friends; this is not enough! Since recently, Jerry now also plays a Coral Electric Sitar; an electric sitar of legendary status, which can be heard as a musical "spice" in many magical songs through the ages, from the sixties to now. But for the first time in history, Jerry really PLAYS the Coral as no one has ever done before! The Word Passed By, The Sun Was Going Down was released on vinyl by OUTERDISK in June 2017 (OD121).

In November 2017, the first album with Jerry Johansson Red - On The Verge Of The Last Things Known (OD212) was released by OUTERDISK. An explosion. The inner mounting flames set ablaze. The new power quartet with Jerry and colleagues, playing electric music of highest density. It's not jazz, it's not rock; it's Red! In the vinyl grooves, the noonward race continues endlessly, all while the firebirds fills the sky with the sound of colors.